At the beginning of December Semarble ended a masterbathroom’s makeover, in a 18th century villa immersed in the vineyards closed to Alba, in the north-west of Italy.
Travertine with its color palettes and texture has a dominant role in the project, even if in the full respect of the existing building.
Seen the succesfull result, obviously celebrated with the client by drinking a good glass of Nebbiolo wine, Semarble decided to write a post for telling you about the adopted design.

Since its inception the building has always been a country house, a place to come to relax, far from the busy life of the fashionable city of Torino.
The original architectural features of the bathroom, survived to an earlier refurbishment, show the rustic style: solid walnut windows and doors, a vaulted ceiling with a complex geometry but simple decorations, an hard wearing floor in squared terracotta tiles.
From the client’s initial request of mere substitution of the ceramic tiles on the walls, Semarble was put in charge of the art direction of all the works.
Since the beginning the key point has been to improve the functionality of the bathroom respecting and better exploiting a space already full of rich history.
The design choises would’ve emphasised the domestic dimension, conveying a warm feeling and extending welcome to the user.
The project is all about the relationship between the new chosen materials and the existing ones: how the colours match each other, how the textures react to the light. 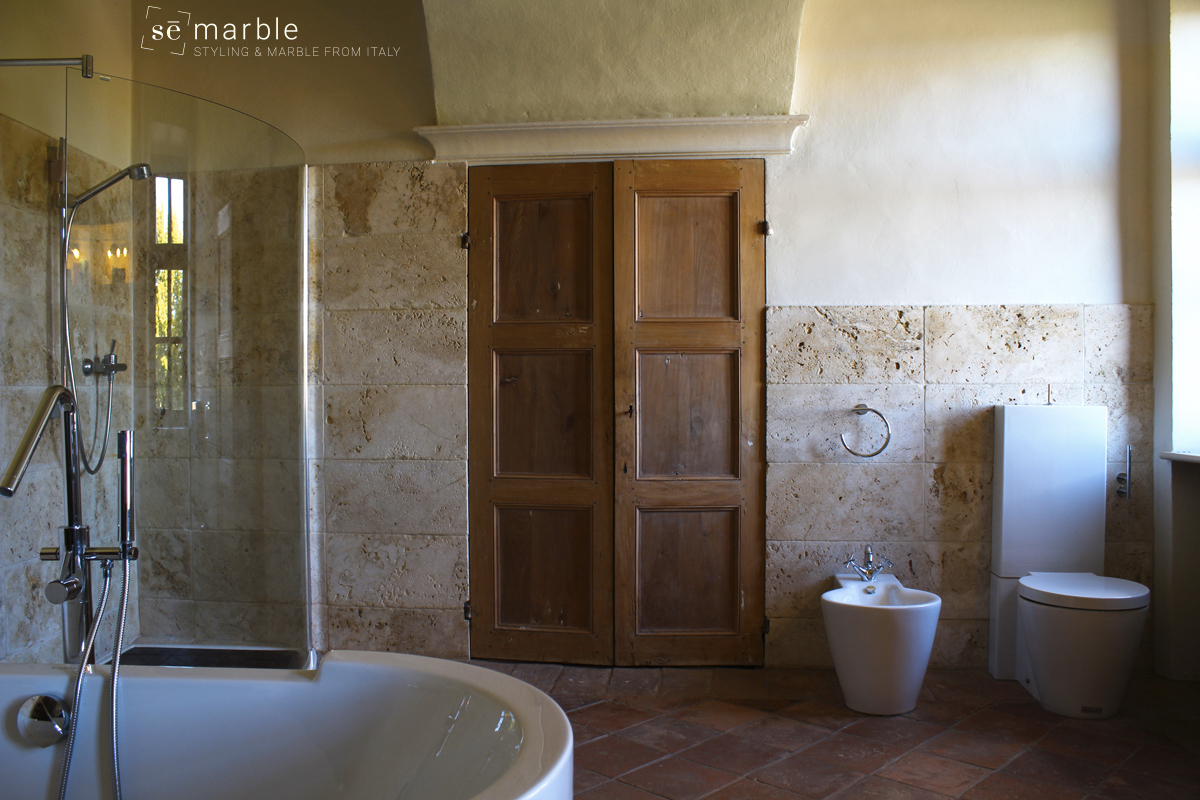 TRAVERTINE, LEAD IN THE PROJECT

Between the various samples proposed to the client, travertine appeared the most suitable material for several particular features:
- THE COLOUR: its pastel shade, with the beige back and a wide palette from brown to grey, perfectly matches terracotta tiles red;
- THE VEIN: crosscut, slightly coludy, it doesn’t impose a strong texture in the area;
- THE SURFACE FINISHING: its smooth honed surface, not filled and not polished, barely reflects the plentful light coming from the windows, providing a feeling of calm to the
surroundings;
- THE RANDOMLY CHISELED EDGES: the edges not rectified and the open little pitted holes give a rustic appearance to the tiles, well including them in the historical context of the
space.
As concern the installation, the travertine tiles have been installed with a random disposition and light grey grout. The stone claddings don’t cover all the walls till to the ceiling but they stop at different heights, creating interesting shapes and contrasts. The tiles have dimensions: 60*30 cm, to optimize the cutting in the best way and reducing the wastage (dimensions of the slabs: 247*157 cm).
The vanity top is in travertino too, with honed surface finishing and water/oil repellent treatments. With a 2 cm thickness and a bullnose edge, it’s mechanically fixed to a metal substructure properly hidden by a stone perimetral cladding. 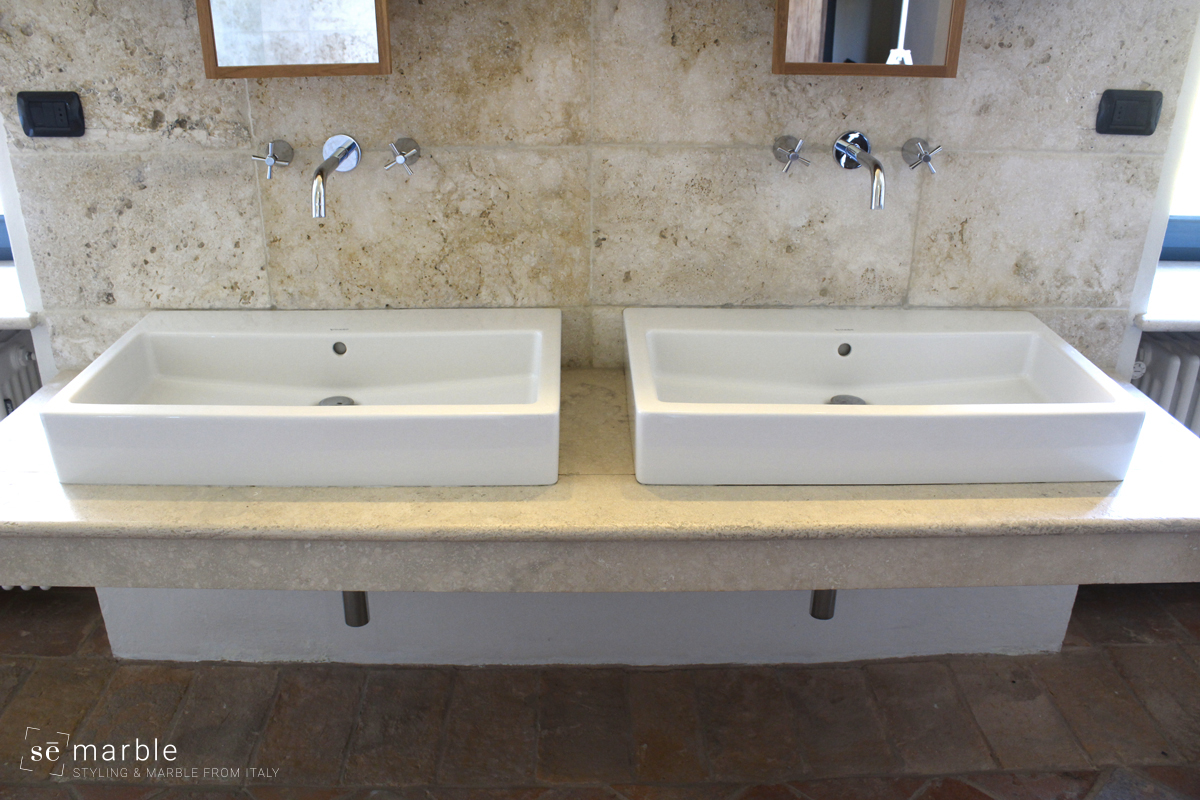 ADDITIONAL INFORMATION ABOUT THE PROJECT

In general large building works have not been necessary, here below you can find a description of the other works carried out during the refurbishment:

- The floor has been preserved, cleaned and improved in its impermeability thanks to the appropriate products;
- The plaster and the cornices of the ceiling have been restored;
- The sanitaries have been replaced, but their position is unchanged;
- The shower and the bathtub have been reversed to give more importance at the last;
- The vanity top, doubled for hosting two sinks, has been moved from the back wall to the space included in the middle of the two windows;
- The window and door frames have been properly restored and improved in their energy performance;
- The wiring has been improved and the spotlights replaced 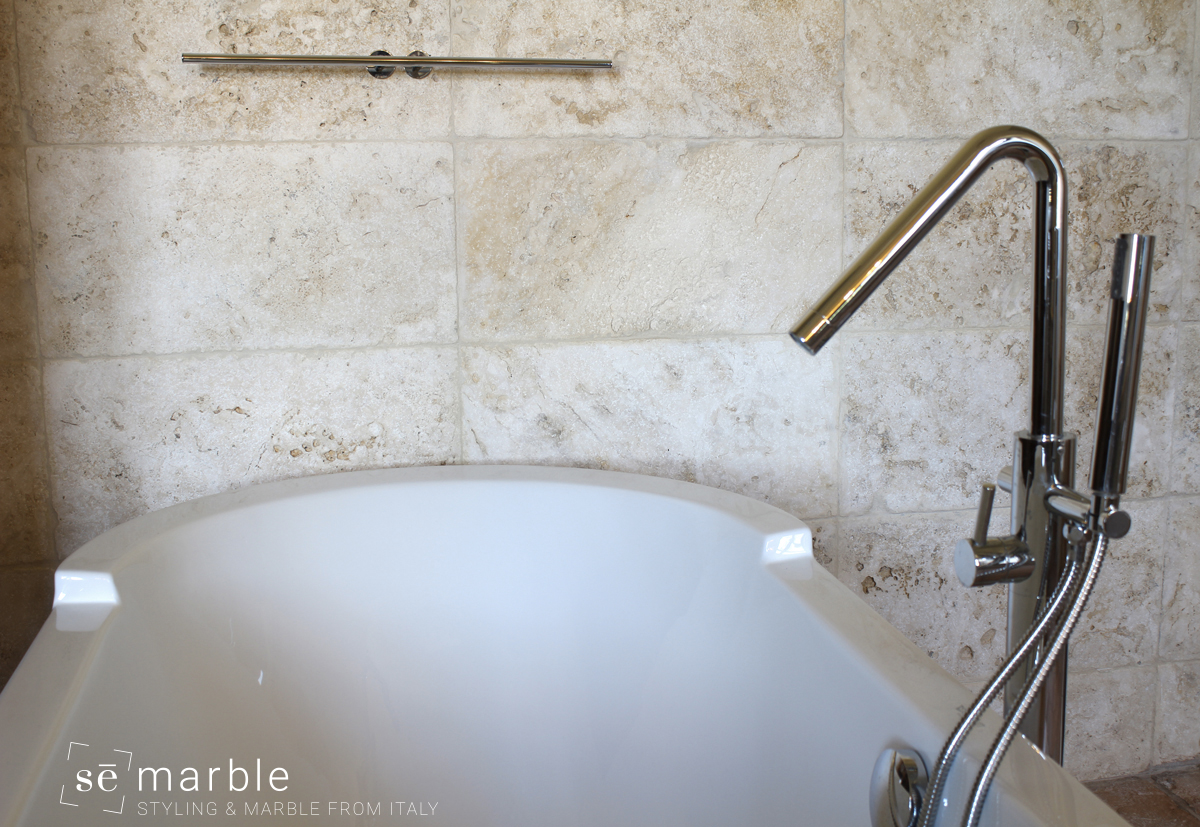 WHAT MADE  THIS PROJECT A SUCCESS ?

- The willing of the client of renewing the bathroom in its entirety and not just in limited disconnetted single works. If Semarble had received just the commitment of
supplying stone material, any spatial and design consideration wouldn’t have been done, at the expense of the total exploitation of the space;

- The full agreement between the client and Semarble, a sort of participated design with shared ideas and decisions, aiming to get a final unique project. We consider the
active involvement of the client, during the design phase , a key element, a necessary condition for the made project to meet its user’s needs

HOW TO IMPROVE THE QUALITY OF YOUR HOUSE WITH MARBLE

Very often the private client, just worried of the technical aspect, hardly ever of the esthetic one, calls the stone company just for day-to-day servicing or for the replacement of any marble item, without thinking to ask them for any advise about what they need.
It happens a specific countertop, threshold, cill, or step of stair to be replaced is ordered just for budget reason without seeing how it is set within the context. The result is to have marble elements in the house with various forms and colours, creating a great confusion of styles without any design control.
It’s definitely right saving money in ordering new marble with good prices; but why not to make the necessity of replacing a ruined vanity top also an opportunity for improving the quality of your bathroom?

Ask for an advice to a marble expert for increasing the esthetic value of your house! 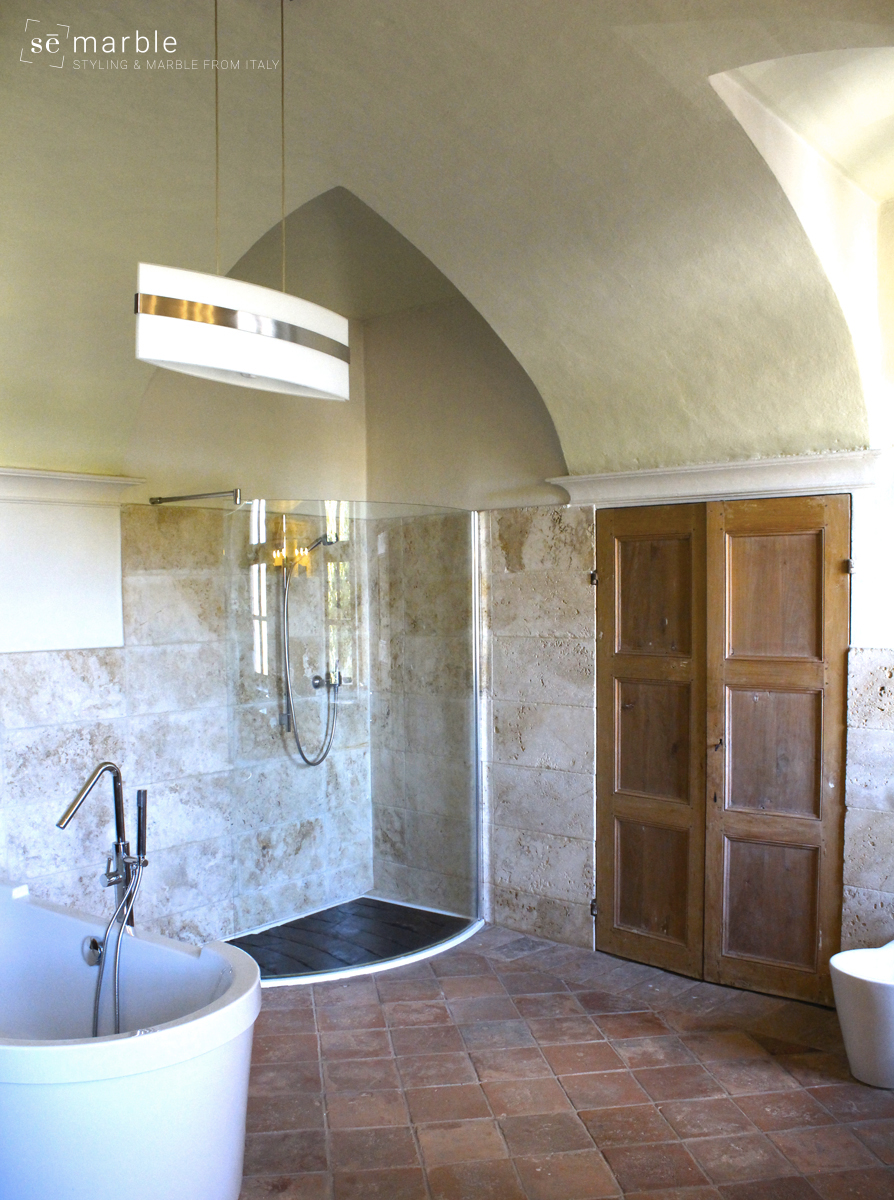